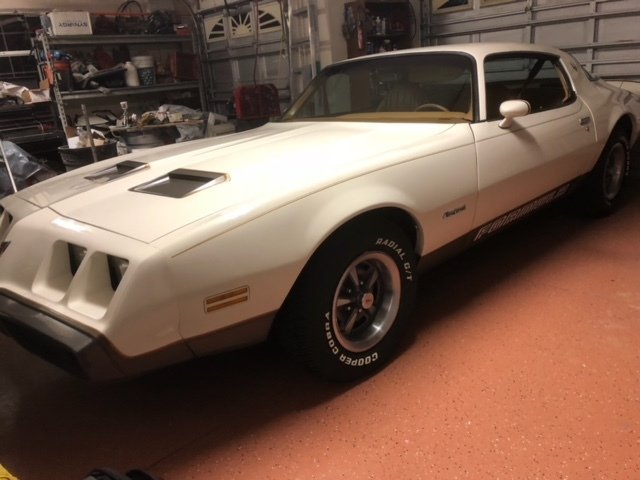 The Pontiac Firebird is an American automobile built by Pontiac from the 1967 to the 2002 model years. Designed as a pony car to compete with the Ford Mustang. The name "Firebird" was also previously used by GM for the General Motors Firebird 1950s and early-1960s concept cars.

The 1979 Firebird was the most popular in its history with 211,453 sold, a record that would never be broken by any other Firebird. This was part due to its continuing popularity from “Smokey and the Bandit,” but also because of revamped styling cues for the new year. It had a new aerodynamic front end and a breath-taking full width tail lamp treatment.

The one we have here at Carlynns Clean Classics is painted in white with a brand new tan interior, headliner, and windshield. The interior could be appointed with all the same luxury and power options available on the Trans Am. Even the Trans Ams famous metal dashboard bezel is standard on this Formula. It also has Air Conditioning, power steering, power brakes.

It is powered by the Pontiac small block V8 that was the standard motor for the 1979 Formula. It provides enough grunt to move the Formula with authority, for 1979, it was more than most of the competition.

73,000 miles showing is believed to be true and had the same owner for 35 years with one repaint over solid body not a bondo special.

This Formula had the base Trans Am performance oriented tuned suspension which included standard 15×7 inch Rally II wheels. With this suspension came standard front discs and rear drums brakes, and this one has new springs, shocks, and exhaust.

The Original Owner's Manual and paperwork is included too.

The Pontiac Formula Firebird that we have here at Carlynn Clean Classics is gorgeous and will make a great car for the new owner. Come by or call us to answer any questions before you buy it.