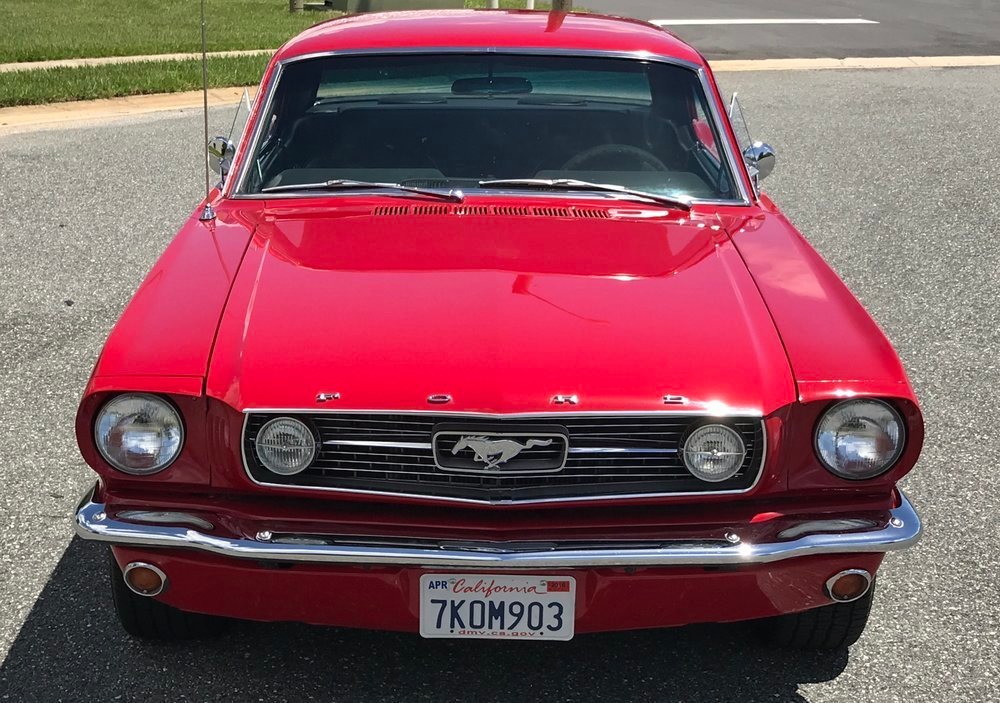 The introduction of the Mustang in 1964 created a new class of automobile known as the pony car. The Mustang's styling, with its long hood and short deck, proved wildly popular and inspired a host of competition including Camaro, Firebird, Cougar and others.

The 1966 Red Mustang GT 289 V8 is the real deal. You do not find a real Red Mustang GT with a real 289 Cubic Inch performance rebuilt engine and 4-barrell carb.

This is a real GT it has the V cutout behind the gauges, fog light switch is factory, four turns lock to lock on the steering wheel, not 6 like a regular Mustang, 4-piston calipers, HD susp, disc brakes, exhaust hangars are correct, and more. We also have a full set of styled factory original tires instead of what is on it we can do that too.

The 1966 Ford Mustang was the highest production Mustang in all fifty three years it has been in production. The world had caught Mustang fever after the introduction of the 1964 1/2 model, and Ford was working double time to try and keep up with demand. The factory in Dearborn, Michigan pumped out a whopping 607,568 Mustangs between August of 1965 and July of 1966.

What caused this incredible demand you ask? How about a gorgeous body, outstanding performance, and a price the every man could afford. King of the hill for chart topping model year 1966 was the "GT" model you see here. Ford chose to give the Mustang a little European flare on the outside, and the performance of a thoroughbred under the hood.

Built around the standard 289CI V-8 available in the base model, the GT's "A" code 289 featured a bigger four barrel carburetor, better intake, and higher duration camshaft to increase the output from the base model's 200hp up to 225hp in the GT.

The suspension was upgraded as well with stiffer springs for better handling and front disc brakes(a rarity in those years) were added to make sure you could "woah" this pony down. On the outside, GT models got a custom grille with fog lamps on either side of the iconic "Pony" emblem. On the sides you will find rocker stripes that look so good, Ford still uses them on Mustangs to this day. Out back the GT model has a unique fuel filler cap on a blackout panel between the tail lamps, with dual exhaust exiting underneath.

This particular GT has been upgraded with aftermarket American Racing "Torq-Thrust" wheels and white letter BFGoodrich Radial T/As. This wheel and tire combination is totally fitting on this classic pony car, and combined with the square set body, they give this Mustang a stance that is just magnificent.

On the inside, it is all business. Black vinyl buckets up front separated by the classic four on the floor shifter with white cue ball handle. The insturment panel is unique to the GT model, and features a speedometer, fuel gauge, temperature gauge, oil pressure gauge and ammeter in five round dials.

This Mustang is one amazing machine, and it can be yours today!! If you are in the market for a super clean, extremely original and well kept first generation Mustang, then look no further!!

The first-generation Ford Mustang was manufactured by Ford from March 1964 until 1973.

It was initially introduced as a hardtop and convertible with the fastback version put on sale in August 1964. At the time of its introduction, the Mustang, sharing its underpinnings with the Falcon, was slotted into a compact car segment.

Lee Iacocca's assistant general manager and chief engineer, Donald N. Frey was the head engineer for the Mustang project, supervising the development of the Mustang in a record 18 months from September 1962 to March 1964, while Iacocca himself championed the project as Ford Division general manager.

Drawing on inspiration from the mid-engined Ford Mustang I concept vehicle, Lee Iacocca ordered development of a new "small car" to vice-president of design at Ford, Eugene Bordinat.

Trim Tag Info Verification
The design teams had been given five goals for the design of the Mustang: It would seat four, have bucket seats and a floor mounted shifter, weigh no more than 2,500 pounds and be no more than 180 inches in length, sell for less than $2,500, and have multiple power, comfort, and luxury options.

Since it was introduced four months before the normal start of the 1965 production year and manufactured alongside 1964 Ford Falcons and 1964 Mercury Comets, the earliest Mustangs are widely referred to as the 1964½ model. Nevertheless, all "1964½" cars were given 1965 U.S. standard VINs at the time of production, and, with limited exception to the earliest of promotional materials, were marketed by Ford as 1965 models.

Standard equipment for the early 1965 Mustangs included black front seat belts, a glove box light, and a padded dash board. Production began in March 1964 and official introduction following on April 17 at the 1964 World's Fair.

The 1966 Mustang debuted with moderate trim changes including a new grille, side ornamentation, wheel covers and gas cap. Ford's new C-4 "cruise-o-matic" three-speed auto transmission became available for the 225 hp V8.
A large number of new paint and interior color options, an AM/eight-track sound system, and one of the first AM/FM mono automobile radios were also offered. The Mustang would be the best-selling convertible in 1966, with 72,119 sold, beating the number two Impala by almost 2:1.