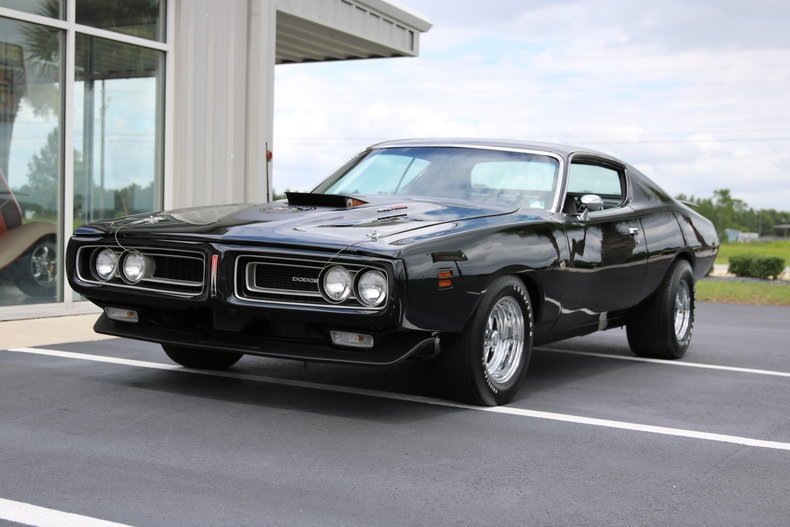 When the Charger was redesigned in 1971, it took the Super Bee with it. The result is a one-year-only combination of modern “fuselage” styling and brute '60s-style horsepower.

It is not only on the 71 www.chargerrtregistry.com but it has won awards at the Carlisle Chrysler Nationals and took Best of Show at the Mopar Nationals in Columbus, OH! And, according to the Production Numbers on that web site, it is ONE-OF-ONE Tuxedo Black with a 383 engine with the N code 383 and a 4-speed, making it even more rare than a 1971 Hemi Charger. It has also been restored to a level seldom seen on these newer muscle cars, and warrants a close examination by any serious Mopar collector.

This Super Bee at Carlynns Clean Classics has been professionally restored and is truly one of a kind. With low miles since its extensive restoration, it has also rolled across the carpet and Sold at a previous Barret Jackson Auction.

This Super Bee was built with a few performance upgrades to open up its full potential, and they include an MSD ignition system, FireCore plug wires, Doug's headers, custom exhaust and 750 cfm carburetor. Many NOS and mint original parts were used in this restoration.

Black was a rare color in '71, but it is correct on this Super Bee. Applied over laser-straight bodywork and some of the most perfectly aligned panels we have ever seen, this is a seriously good-looking car. The long nose/short deck styling made popular with the pony cars translated well to the new Charger, and this one looks fast just sitting still.

The trim and bright work have been expertly restored as well. The emblems are bright and crisp, including the callouts on the hood and Super Bee logos on the front fenders. As a link to the past, the tail lights are housed in an argent silver panel, and the two exhaust tips peek out of the rear valence in custom-fitted notches.

Horsepower was still in fashion in 1971, and Chrysler was more than willing to serve it up for anyone who asked. Unfortunately, the same insurance premiums and gas price spikes that ultimately killed the big blocks limited customers. On the other hand, that makes cars like this one with its nearly 400 horsepower 440 engine and 4-speed manual transmission incredibly rare and valuable today. The engine bay is immaculately finished, better than when it was new. The block is bright Hemi Orange paint, the inner fenders have been finished to the same standards as the external bodywork, and the plated parts are shiny and clean.

The 4-speed manual transmission remains behind the big block, and in true Mopar fashion, all the heavy duty gear was included.

That means the transmission is a rugged 18-spline unit, and out back there's a Dana 60. The bottom of the car is as spotless as the top, with exceptional detailing visible throughout. A new dual exhaust system with factory style mufflers and tips was installed, and the power disc brakes have been fully rebuilt. And like the engine bay, you'll definitely be impressed by the details and how crisply executed they are, including all the brackets, fittings, and hoses that show bright plating and an authentic finish. Proving that good looks never go out of style, the period correct Cragar Mag Wheels are cool, and they wear reproduction Goodyear Polyglas tires in the front and 50 Series Goodyer tires in the rear.

The '71 Charger's interior looks just as good as new with comfortable high-back bucket seats, a dashboard that includes a 7000 RPM tachometer and 150 MPH speedometer, and woodgrain trim. Also note the leather-wrapped Tuff Wheel, the pistol-grip shifter, and the lack of a console. The original and unique AM radio still lives in the dash, with its knobs. Don't forget to look close at the picture and see the switches for opening up the exhaust and “Ramcharger” Air Hood Scoop.